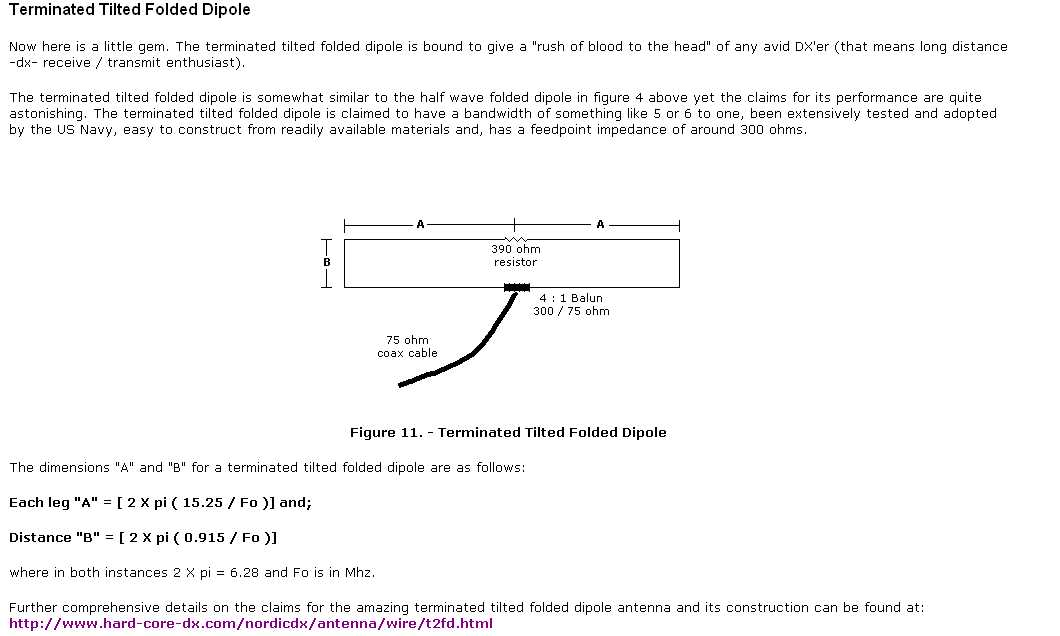 How to feed a T2FD correctly

Question: I've got a 166 ohm situation and not, as recommended, a 200 ohm; will this effect the design quality of this antenna?

John H. Carver Jr.: I really don't think it's going to hurt you at all. In a receive only situation there's a lot of slop to things. Besides, of all the articles I've read on the net, no one really agrees about the value of the reisistor. Several sources say 390 ohms for a receive situation and if you're using the antenna to transmit you have to use another whole set of values.
The best way to tell would be just to put the thing up and let your ear tell you. I've done a lot of crazy things with TTFDs and they always seem to work okay.
A receiving antenna is a very forgiving thing.

Question: It regards the target impedance for the T2FD. The sites mentioned in this thread all have Guy Atkins' specs: using a 4 to 1 balun into a 75 ohm coax (which then presumably goes into a 50 ohm input). Arnie Coros' specs call for using a 6 to 1 balun to feed over a 50 ohm coax into a 50 ohm input (and he adds that the 6 to 1 may be hard to find).

So to follow onto this thread: could someone discuss how "bad" a mismatch it is to run a 75 ohm coax into a 50 ohm input? I mean, is it a matter of being a "mere 25 ohms" or does the 75 ohm being 50% greater than 50 ohm tip the scales? says to use an antenna tuner. What do you all think? (Michael Pelikan)

Dale Parfitt: I really doubt the antenna looks like 75 Ohms resistive except across a narrow spectrum.
With that said, a 75 Ohm (or a 37 Ohm) to 50 Ohm mismatch results in a 1.5: VSWR- nothing to worry about.

John H. Carver Jr.: And if you look at the January 1988 Poplular Communications for Joe Carr's antenna column you'll see slightly different numbers again.
This antenna is also mentioned in Joe Carr's Receiving Antenna Handbook, Antenna Toolkit and Practical Antenna Handbook. Arnie Coro always talks about using tuners because he uses most of his antennas to transmit with also, although, in my experience, using a tuner can't hurt anything.
While normally I do try to be careful about matching and balancing and all that because I do believe that the more efficent the antenna is the more signal you'll pull in, in all actuality receiving antennas are very forgiving and there's room for all sorts of mismatch without really affecting reception.
If I had just built a new antenna and only had 50 ohm coax where I needed 75 ohm or vice versa I would use what I had rather than buy new. Believe me, your ear will never hear the difference. Now transmitting is a whole different ball game.
As I said earlier, I try to be careful about things but I'm not a fanatic about it. Sometimes people get all hung up on numbers from test equipment that is testing things that will make no difference to your ear. I've been building antennas for thirty or forty years now and while I do use test equipment and I surely wouldn't transmit on an antenna that had a bad SWR, I still use my ear for the final test meter. Especially on receive only antennas.
Receiving antennas are fun to build and it's virtually impossible to screw anything up, so build away and have fun.

T2FD -- a match for any antenna

Tests were conducted at the home of Fred Carlisle, a DXer from rural . Nearby his home is a large dairy, whose processing equipment operates day and night and generates some amount of electrical interference. The noise was rarely audible on the T2FD, yet signal strengths were comparable to (or better than) the other antennas in use, on a range of frequencies:

The 500 ft. and 50 ft. antennas were switched in and out of the receiver's high impedance input, the T2FD fed the 50 ohm coax input. The receiver used was a NRD525 with a custom, highly accurate analog S­meter. The meter is calibrated to the industry standard S­units/microvolts scale.

As the results show, the T2FD antenna did not begin to drop off in performance until down in the 120 meterband. This is well below the 60 meterband design frequency of this particular T2FD.

I used a T2FD in 1961. At that time I had lots of land to experiment with antennas and each weekend the local gang would come over and we would put up another one.
W8JK antennas were my favorite wire antennas although they were rather awesome when built for 40... also had lots of wind resist. and the smallest ice storm would bring them down.

The T2FD gave a good accounting of itself. If I remember correctly I built mine from an article in either CQ or the CQ Antenna Manual. I don't recall it ever appearing in the ARRL Antenna Handbooks. It may have been in Bill Orr's Radio Handbook at one time.

It was an excellent receiving antenna for SWL use. After I dropped traffic nets and did little but chase DX on the higher freqs with a beam I used the T2FD on a Hammarlund HQ-180 to monitor commercial RTTY.